As readers will know, the absurd grovelling of Hydro One and the Province of Ontario and its taxpayers to Six Nations is without any rhyme or reason - other than political.  Six Nations halted the $116 million dollar project that would link New York with the Ontario grid in 2006 and the towers (those not demolished by Six Nations in an unparalleled act of unpunished vandalism) have sat idle without any wires.  In two articles presented in this blog the author discussed the wish of the Elected Council of Six Nations to restart the work and ensure their involvement on terms where they would "purchase" a 25% interest in the line where the Canadian taxpayer would actually foot the bill.

In the topsy turvy world that we in Caledonia live in, the aggressors are calling the shots, and few have stated the obvious - that the taxes on the unstrung lines have cost Ontario taxpayers millions of dollars (demanded by Hydro One), let alone the millions or billions of dollars of lost revenue since Six Nations blocked the construction of the lines needed to bring electric power from Niagara Falls.  As a reminder of the specifics, here follows what was reported in the Sachem article of 23 October 2017:  A CTV News investigation in 2015 revealed that the incomplete NRL has been costing Ontario taxpayers millions of dollars as it sat idle.  According to CTV, Hydro One has been billing taxpayers for interest payments on the NRL. The total from 2007 to 2015 was just shy of $50 million.

The author has made the case that Six Nations needs to reimburse all who have lost revenue or paid money that can be attributed to Six Nations refusing to "allow" the continuation of the work from 2006 to 2018.  The unmitigated gall of now wanting to profit from their decision to "permit" the work to proceed.  NO, pay back what YOU OWE and we can talk!  I want to make it perfectly clear that Six Nations has zero legal rights to be involved in any such decision making.  The towers are not on the Six Nations Reserve, they are on land legally surrendered by Six Nations between the 1830s and 1847.  All Six Nations (and allied Nations such as the Delaware and Nanticoke) Chiefs at the time signed off on the sale of the property, and the records are available for all to view in the RG10 (Indian Affairs) Series at Library and Archives Canada in Ottawa.  The author has included many of these documents in previous blog postings.  Six Nations have no more rights to this land today than the author does to lands owned by the authors ancestors down river and sold before the birth of the author.  It is also important to note from time to time that the Six Nations are not aboriginal to the Grand River lands.  The legal owners were the Mississauga, from whom Governor Sir Frederick Haldimand purchased the "Haldimand Tract" for the use of the use of the Six Nations (although some argue it was the Mohawk alone who were the recipients of Haldimand's purchase).  Six Nations never owned an acre in fee simple, it was and is Crown land unless patented.  To assert rights to lands alienated 170 plus years ago is legally and morally wrong.  There are no aboriginal or treaty rights that apply.

The author was unable to find any further information on the subject since the article that appeared in the Sachem in 2017, and discussed in detail in the author's blog postings here and here.  Hence they decided to do a little local sleuthing.  The results of that investigation are entirely visual, and can be viewed in the pictures below taken on 24 September 2018: 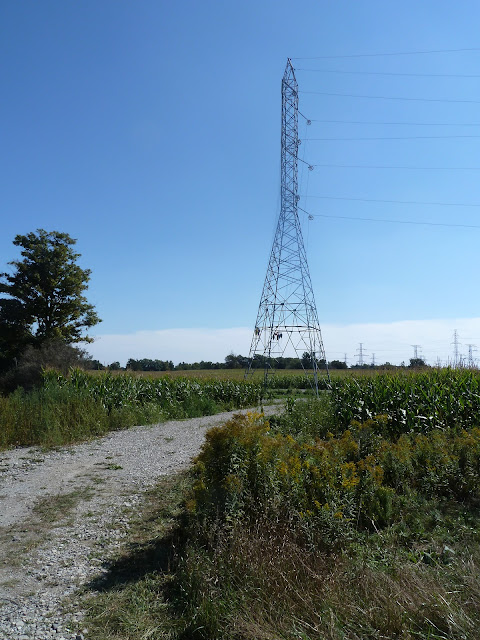 Above is the most easterly tower which has been strung to date. 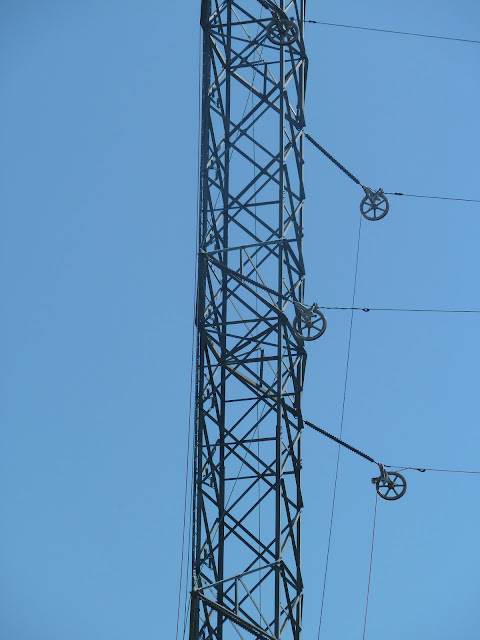 Pulleys and wires end at the tower above 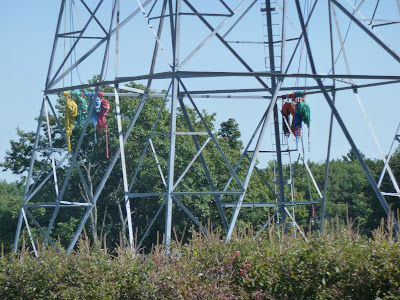 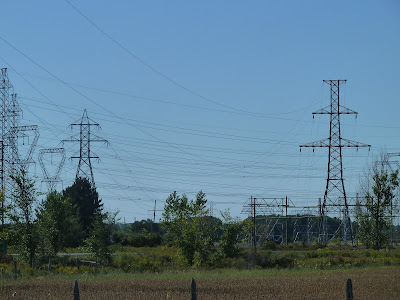 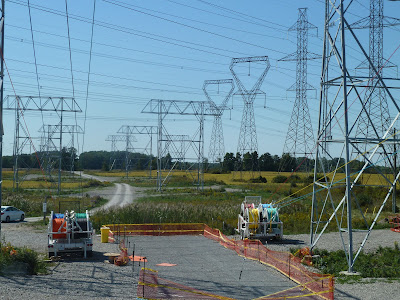 I will end this post with the same question I pose so often:  when will Six Nations apologize to the citizens of Caledonia and the taxpayers of Ontario for all the damage caused by their actions since the year 2006.  In Canada we seem to have politicians apologizing from actions taken by the Colonial Government hundreds of years ago - what about recent evens such as the last 12 years - and do apologies only flow one way, from the Government to aboriginal groups and not the other way around (that was a rhetorical question).

Posted by Administration at 10:05 No comments: