More Threats by Men's Fire, This Time to "Shut Down" Enbridge Pipeline Work

Well, if it isn't Highway 6, it will be something else.  In what seems to be a rather pathetic attempt to keep themselves "relevant", Men's Fire have decided that they must be consulted or dire consequences will ensue.  Of course the target is not some trailer park in Drumbo, but the mega wealthy Enbridge's number 9 oil pipeline.  The route of the pipeline is shown below: 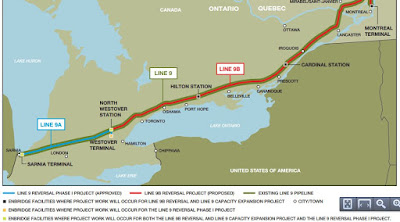 A close up view of the above would show that Line 9b does not dip anywhere below Highway 403.  In other words it does not pass through Six Nations Territory.  However, that is of no concern to Men's Fire and like minds - through some twisted logic Six Nations still has a stake in lands that they sold 150 or more years ago.

One issue that will surface, because it always does, is that this is aboriginal land.  It is not.  The Haldimand Tract was granted to Six Nations for their use, but the title is vested and is still vested in the Crown.  The fact that Six Nations have no business to put their noses in matters outside of IR 40 the Six Nations Reserve just simply will not sink in - largely because their claims go unchallenged.  No one in Government (Provincial or Federal) has the guts to come out and say to Six Nations that, "you alienated all rights, title and deed to these lands 200 years ago and do not have any legal standing relating to the lands in this area".  No one in authority seems willing to tell the truth and challenge the thugs who insist that if they don't get their way, all hell will break loose.  It is total insanity, but welcome to politically correct Canada.

In "Turtle Island News" of 23 September 2015 is an article entitled, Enbridge in talks with Six Nations Men's Fire over Line 9 (p.7).  Here we are informed that Men's Fire wish to be informed about "pipeline safety and integrity digs" - routine operations for Enbridge.  Recently members of Men's Fire met with representatives of Enbridge, in Brantford, to talk about spill safety regarding the company's plan to reverse the flow of oil in its Line 9B pipeline that runs through Haudenosaunee Territory.

Two concerns immediately come to the fore.  First, as noted, Six Nations have absolutely no rights relating to what Enbridge does or does not do.  Secondly, we are on the verge of hypocrisy here when Men's Fire concern themselves with matters that are actually providing a safe means of transport of oil near Six Nations lands.  Surely they are aware that oil rumbles across the aged railway bridge every day on tracks that I, based on personal inspection, would say are "marginal".  What if the whole trainload hit a defective spot in the tracks and all the tanker cars ended up in the Grand River one mile east of the Six Nations Reserve?  This scenario is better than a well maintained pipeline which, by comparison to railway transport, is many times more safe and secure.  The big picture seems to elude Men's Fire.  They are well aware that the railway which runs through the area where the Stirling Street Bridge was until it was torched by Six Nations activists in 2006 (and has not, and will not be repaired).  The political fall out of addressing anything to do with the railway makes it an unlikely target at present.  No one ever seems to think of the monumental environmental disaster which is immanent on their doorstep, but would rather focus on politically expedient topics like pipelines where there is already a host of militant groups that will provide them with support.

Men's Fire question, 'Who gave them the authority to go through our territories?' He [B.M.] said there needs to be an emergency management team in place, manned by Six Nations [presumably paid by Enbridge] people, in case of a spill.  'The people here in the community; they're the ones who know the layout of the land.  They know the medicines it (an oil spill) could harm.  They know how it could impact the environment.  Our people know that.'  Really, the average Six Nations person has the expertise to address the effects of an oil spill - how did that come about?  Who knows the "layout of the land" in the area north of Highway 403?  There are "regular Canadians" who would be in a far better position to have the knowledge to cooperate effectively with Enbridge.  Six Nations has a serious problem with the environment on the Reserve - perhaps that should be addressed before claiming some sort of magical expertise to understand the impact of a potential oil spill outside of their own land.

Of course, Men's Fire get to the threats.  They told Enbridge that if they don't comply with Men's Fire, they'd shut down the reversal project.  That would be an illegal act, and if anyone had any guts they would simply obtain a Court Injunction and have the OPP arrest any who violate the terms of the Injunction.  Line 9 is a long way from "reinforcements" available at the Reserve, so it may be a hollow threat - except for the fact that corporations have been known to comply with Men's Fire or HDI (Haudenosaunee Development Institute) since it is politically risky to challenge Indians, the perceived "guardians of the land" (take a trip to the Reserve and see the reality about how well the term "guardians of the land" fits).

Then, enter factionalism.  Men's Fire have not been paid for this "required" work.  However, B.M., was under the assumption that HDI (Haudenosaunee Development Institute) did get consulting fees (from Endridge).  In other words payola has already crossed palms, but Men's Fire did not see any of it.  The Director of the HDI denies that any negotiations with Enbridge have taken place, and notes that Men's Fire have not contacted them about the matter of acting in the role of an emergency management plans.  The finger of blame was also pointed at the group of Six Nations working with developer Steve Charest (whose project is at Eagle's Nest in Brantford).

As to Enbridge, they noted that the integrity digs have already been completed.

All in all, plenty of blame in relation to a non - issue, once again stirring up the simmering pot at Six Nations.

DeYo.
Posted by Administration at 12:35