After the horrors of the 2006 "reclamation" (illegal take over) of the Douglas Creek Estates property by Six Nations members, as events unfolded it became crystal clear that the latter had absolutely no empathy or regard for local residents impacted by their actions.  However, it is the responsibility of the Federal Government to state in no uncertain terms that the evidence clearly demonstrates that there is no valid claim attached to that land (lawfully ceded by the Six Nations Chiefs in Council in 1844).  It is also the responsibility of the Provincial Government to stand four square behind their Land Registry system noting that all Crown Patents in the Haldimand Tract are valid and that owners can rest assured that their property rights are guaranteed.  Alas, none of these parties have acted responsibly, with the result that an air of uncertainty lies as a heavy dark cloud over any land transactions within the Haldimand Tract - no title is secure at this point in time.

A classic example of those impacted most directly (other than Henco Industries Ltd.) is the Rowe family who own the Grand Island Bar B Q on Lumber Island between Dunnville and Byng.  They are at present unable to sell his property due to the "contested" nature of the land, and neither the Federal Government nor the Provincial Government will step in to provide the hard evidence that the property was ceded in 1834.  I wonder if there is any evidence that Six Nations is concerned about the suffering of this man and his family - actually I don't wonder, because I know the answer.

An article in the Sachem, seen here, will provide a sense of what Mr. Rowe was experiencing in 2012.  A comprehensive article is found here under the title, "Businessman's land battle"; or a similar article in "The Dunnville Chronicle" see here.  An update in the Sachem in January 2014, seen here, shows that Mr. Rowe, whose family has owned the property for 131 years, is still faced with the challenge of selling the property.  However the Grand Erie Business Centre is attempting to breath new life into the property since it is considered an asset to the business of the area.

A recent issue of the Sachem confirms that the problem has not gone away, and that Mr. Rowe is still squeezed between competing interests.  In an article of 18 March 2014, entitled, "Douglas Creek Estates:  The economic impact 8 years later" (see here), some local politicians such as the Mayor of Haldimand County, sees reason for optimism, not everyone feels the same way. Former Dunnville business owner David Rowe blames the challenges that he’s had with his business on unresolved land claims.

Rowe was the owner of Grand Island Bar-B-Q in Dunnville, which he has been trying to sell for several years. He said the issue of an unresolved land claim on his property has scared away interested buyers.

“A native land claim affected my property title, which prevented my ability to liquidate the land to pay off my debts,” Rowe said.

According to Rowe, Six Nations elected council, as well as the federal and provincial governments, have informed him about the claim on his 115-acre family property.

Lonny Bomberry, solicitor and lands and resources director with Six Nations elected council, confirmed that Six Nations started a legal process with the government concerning Rowe’s property in 1995, but the issue remains unresolved.

“Mr. Rowe’s situation is one of a kind,” said Haldimand-Norfolk MP Diane Finley. “I know that many businesses have had some challenges recovering from the occupation. On the other hand, I know of many that have done very well since then.”

Buyers and sellers of land are not required to consult with Six Nations. Still, Rowe said he believes interested buyers are scared away because they’re not sure if the province will stand behind land title.

“Unfortunately, people in the housing business have lost confidence that their buying and selling of land has the full support of government when there’s native activists involved,” Barrett said.

However, certain actions need to be taken - now.  The Provincial Government needs to report that a Crown grant was issued, and since the 1830s the land has been recorded in the Ontario Land Registry system, Haldimand County, Cayuga.  The government has to be willing to stand behind the truth, and not capitulate (or simply delay indefinitely) to the false assertions of Six Nations in this matter.  Perhaps this land claim should be set as an example and in the strongest terms state that if Six Nations believes that the Land Registry is in error, they need to produce evidence as to why, after 180 years, they as an outside party can step to the fore, make unwarranted assertions, and cause the financial ruin of a Canadian citizen who has a legally valid deed for his property.

I am very familiar with this property.  It is much like the Arbour in Port Dover where generations of my family have stopped in for a "foot long and a Glow".  At the Grand Island Bar B Q, it was the milkshakes, the rental boats, and the mini golf where my children and their cousins as well as two generations of adults would gather for a day of family get together.  My positive experiences here have led me to examine the facts of this dispute, and as a result stand 100% behind Mr. Rowe and his family in their attempt to seek justice.

The following map from the Haldimand County Atlas of 1879 (Page and Co.) shows that Lumber Island (Grand Island), above and to the right of the green patch in Byng, is part of Dunn Township. 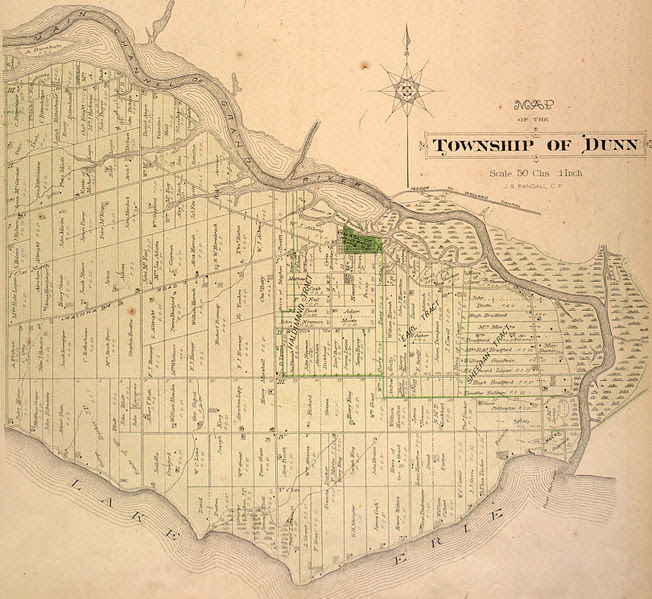 Thus, the land surrenders pertaining to Dunn Township will show the early history of the transfer of ownership from Six Nations to the Crown in order that the latter use monies from the sale of their holdings here to augment the Six Nations Trust Fund.

In a previous blog pertaining to wind turbines, I examined the evidence relating to the surrender of South Cayuga and Dunn Townships.  I will repeat the information here.

Surrender Number 38 occurred on 8 February 1834, ten years prior to the general surrender of 1844, 21 of the "Sachems or Chiefs" of the Six Nations, doth grant, bargain, sell, release, surrender and for ever yield up to "His Majesty William the Fourth", the Township of Dunn, and the parts of Moulton, Canborough, and Cayuga Townships (later split into North and South Cayuga Townships) not already surrendered.  Those who signed included Henry Brant, Oneida Joseph, Jacob Martin, John [Smoke] Johnson, Laurence Davids, William Alvis, and Jacob Johnson, all well known and respected chiefs who participated in the surrenders of the 1840s which resulted in the Reserve taking its present shape.  See, Canada, Indian Treaties and Surrenders from 1680 to 1890, Vol.1, The Queen's Printer, Ottawa, 1891, pp. 91-94.  Soon after the surrender, Crown patents were issued to purchasers for the 100 acre lots that had been surveyed by Lewis Burwell, and the deeds were registered on title, and can be found to this day in the Land Registry Office in Cayuga.  So this begs the question, how can Six Nations claim "unceded" land in a parcel that was surrendered in its entirety, even the portion including the Grand River itself, in 1834.

In case Six Nations are trying to ferret out slight imperfections in the wording of the documents to further their probe for any "weaknesses" in order to try and recover lands to which there is not a hint of legal rights.  The surrender also mentions that the surrender, includes the waters of the Grand river, and furthermore, Together with all the woods and waters thereon lying and being, all and singular the rights, privileges and appurtenances thereto belonging, to have and to hold the said parcel or tract of land and premises, with their and every their appurtenances unto His said Majesty (pp.92-3).

It is unclear why Mr. Rowe's property is being singled out, but I recall a blockade and work stoppage in the 1980s on the lands immediately upriver on the opposite (north) side of the bridge connecting Dunnville and Byng.

Whatever Six Nations thinks they are owed or own, they are wrong.  The Federal Government needs to stand up and publically (not just in newspaper interviews with Department of Indian and Northern Affairs officials) announce that the records in the Indian Affairs Papers, RG10 Series, clearly and unequivocally show, along with the above surrender, that the lands have been correctly placed in the Ontario Land Registry system.  It is the duty of the Province to assert in the strongest terms that they stand behind their Land Registry, and if necessary then both levels of Government need to take Six Nations to Court should they ever attempt another work stoppage in the Grand Island (or other Haldimand Tract) area.  At that point a Court Injunction will be issued and if Six Nations HDI, CAP or other groups or individuals violate the Order in any manner, then fines and prison time will ensue if blatantly illegal activities here do not stop.  Someone needs to grow a set of .........., and show some teeth.

The evidence, based on my 35 years of research into the relevant records, and those presented to Justice Harrison Arrell of the Ontario Superior Court in Brantford in a recent Court ruling, needs to be made public, and someone in government grow a backbone to protect the legitimate rights of the citizens of Ontario and Canada.

Posted by Administration at 08:19