The lands of the Haldimand Tract were first surveyed by Augustus Jones in 1790-1.  Both his survey notes and his sketch (showing the location of the homes of the earliest European pioneers as well as Indian villages) survive, but the map leaves much to be desired.  Two years later another survey map was created at the behest of Governor John Graves Simcoe.  Here the survey includes the trail system, as well as the Indian villages - all shown within the context of the Niagara Penninsula.  Note that the top end of the Tract "dead ends" long before the headwaters of the River.  The 1793 map is shown below (Ontario Archives, Simcoe Maps, Folder I, 445786, c.1793). 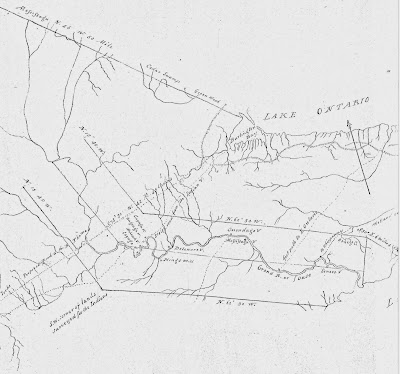 Those who wish to know the details of the original Haldimand Proclamation of 1784, by which document the Six Nations were given six miles on each side of the Grand River from the mouth (at Port Maitland) to the headwaters (this definition proved elusive).  The wording may or may not recognise the pre-eminence of the Mohawk - that is a matter of debate as is much else about this document which reads that due to the, early Attachment to His [Majesty's] Cause manifested by the Mohawk Indians, & Loss of their Settlement they thereby sustained that a Convenient Tract of Land under His Protection should be chosen as a Safe & Comfortable Retreat for them & others of the Six Nations who have either lost their Settlements within the Territory of the American States, or wish to retire from them to the British ..... do hereby in His Majesty's name authorize and permit the said Mohawk Nation, and other of the Six Nation Indians as wish to settle in that Quarter to take Possession of, & Settle upon the Banks of the River commonly called the Ours [Ouse] or Grand River, running into Lake Erie, allotting to them for that Purpose Six Miles deep from each side of the River beginning at Lake Erie, & extending in that Proportion to the Head of the said River, which them & their Posterity are to enjoy for ever (Johnston, pp. 50-1)..

Thus it can be seen that the Proclamation only gives the Six Nations the right, to take possession of the Grand River lands.  They were not deeded in fee simple,  and were to be administered under the "protection" of the Crown - hardly language which reflects any sort of concept of equality on the part of the Governor.  The Proclamation is not a deed nor a title document, it is a decree from one Government official who put his own seal (not that of the Privy Council) to the paper.  It can be argued that the rights to the lands of the Haldimand Tract are still vested in the Crown, and Six Nations "ownership" is something that can be debated. The lands had been purchased from their rightful owners, the Missisauga, by Governor Frederick Haldimand to enable a legal transaction of land that could be offered to the Six Nations - note the wording though, even the definition of the grantees is problematic.

Even Court rulings 50 years after Haldimand put his pen to parchment upheld this concept of "mere possession".  In the 1835 Jackson v. Wilkes court case, a King's Bench justice said the October 25, 1784 Haldimand document was a "mere license of occupation”.
Source: Jackson v. Wilkes, 1835; Upper Canada King’s Bench, (O.S. 142) - thanks to Garry Horsnell for this reference.

Governor Simcoe ran into great difficulty with the wording of the Haldimand Proclamation, including its very brief description of the lands purchased for the Six Nations, and the fact that the headwaters of the Grand River has not at the time been purchased from the Mississauga.  Hence Simcoe attempted to rectify this matter by issuing the Simcoe Patent of 1793, to which the above map refers.  While it appeared to confirm most of what Haldimand granted to the Six Nations, Joseph Brant and his people largely ignored it because it failed to acknowledge a title in fee simple (free hold) which would have allowed Brant and the other Chiefs to sell or dispose of the land in any way they saw fit.  Instead, Crown approval was a pre-requisite in all land sales.  Brant refused to accept the terms of this Patent, so it is unclear as to what application it may or may not have today.

These and related documents can be seen in C.M. Johnston, The Valley of the Six Nations: A Collection of Documents on the Indian Lands of the Grand River, Toronto, The Champlain Society, 1964 in the chapter, "A Disputed Title" beginning on p. 70.  Unfortunately, although out of print, a downloadable copy of this rare and valuable book does not appear to be available on the Internet.
Much of what is written here, which includes summary information directly from the aforementioned book by Charles Johnston  The Wikipedia article also includes a copy of the original survey of 1821, shown below.

The current perspective of the Six Nations as to what constitutes the Haldimand Tract is found in the following link, which also helps put the land in context for those not familiar with the area - with cities such as Toronto and Hamilton in view.  See here.
DeYo.
Posted by Administration at 22:23