Will the Supreme Court Decision in the B.C.Tsilhqot'in Claim Affect Six Nations?

The Haudenosaunee Confederacy Chiefs Council (HCCC0 and their enforcement arm the Haudenosaunee Development Institute (HDI) seem to be wringing their collective hands in glee over this following Court case.  Perhaps this is a hasty and precipitous response.  First we will need to look at the details of the Supreme Court decision, and the way that the HCCC et al. see it as impacting their situation, particularly in relation to their legally subordinate status to the Six Nations Elected Council.

Unfortunately the Province of British Columbia has been deficient in addressing the claimed treaty rights of its aboriginal people, in contrast to Ontario which has treaties (largely from the 19th Century) covering the entire Province.  Thus in B.C. many bands have been relegated to the area immediately surrounding their villages.  They claim that their aboriginal rights extend far beyond these small patches, which is doubtless true - but how far, that is the sticky question.  The can of worms has finally been opened.

For years commercial logging operations have been harvesting timber within the territory claimed by the Tsilhqot'in First Nations (TFN), who are clustered in 7 villages southwest of Williams Lake.  For years the Tsilhqot'in people have been claiming that this is an infringement on their aboriginal rights - it is land that is traditionally theirs, and they need to be consulted before any commercial activity takes place within this domain.  One of the stumbling blocks, in addition to the B.C. Government dragging its heels, is that the group did not have a geographical aboriginal territory that had been surveyed or in any other way clearly defined.  A serious problem is that the 59 aboriginal groups have competing interests (overlapping claims to land) in certain regions.  Thus, before any ruling could be made, it was imperative to ascertain clear evidence to support the Tsilhqot'in claim.

There are many media articles on the subject, and it is not necessary for my purposes to be comprehensive, so I would refer interested parties to articles such as the one here from the CBC.  The Supreme Court of Canada heard the case and ruled on 26 June 2014 in favour of the Tsilhqot'in position.  It awarded 438,000 hectacres of land to the TFN as aboriginal territory.  Although they must not sell this land, they must be consulted by any party who wishes to establish any sort of commercial activity (e.g., logging, pipeline, resource extraction) within these boundaries.  The geographical boundaries were established with the help of academics, and fieldwork to collect oral histories.  Quoting from the above article:

Kent McNeil wrote the book on aboriginal title — and a number of learned articles to boot. His book, Common Law Aboriginal Title, was one of the texts cited in the Supreme Court's decision.

He would agree with John that there is no question about land anymore — if you're Tsilhqot'in. 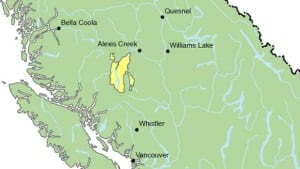 The Tsilhqot'in First Nation is asking the Supreme Court of Canada to recognize its aboriginal title over a wide area to the south and west of Williams Lake and Alexis Creek, which it considers its traditional territory. (CBC)

Must establish borders on the ground

"Each First Nation is going to have to establish where its aboriginal title is on the ground," McNeil pointed out. So giving up on negotiations and going to court has risks.

"The outcome in court is, yes, they are, no doubt, going to be able to prove they have aboriginal title. But the extent will depend on the evidence," he explained. In the Tsilhqot'in case, the original trial judge took five years to outline the borders of their title claim. And that involved visits to the land and talking with elders for oral historical evidence among other sources.

"So it's not necessarily a better option. They've got a much stronger hand than they had before in the negotiations" and, said McNeil, that's because governments can no longer argue that aboriginals only have title to the postage stamp-sized areas that were their villages.

Implications of this Ruling:  There are other First Nations, both within B.C. and others such as Inuit groups, and the groups whose aboriginal territories include the James Bay watershed in Quebec, who want to re-open negotiations.  Actually a more accurate statement is that their legal advisors have told them that it would be worthwhile to proceed in a manner similar to the Tsilhqot'in.  I am not in a position to comment about these possible claims, but it is time to turn to what some at Six Nations have said in relation to the Supreme Court decision.

What this Means for Six Nations:  Before I delve into how some at Six Nations have jumped on this ruling, and provide the specific statements of various parties, I would like to mention some facts that should be (but aren't) obvious:

1)  Ontario has already negotiated actual treaties and purchased the land outright from the aboriginal owners.  These treaties and surrenders are largely found in, Canada, Indian Treaties and Surrenders from 1680 to 1890 - in Two Volumes, Ottawa, Queen's Printer, 1891.  The situation in British Columbia is in no way comparable to what the circumstances are in Ontario.

2)  The Six Nations are not aboriginal to Ontario but rather what is today Upstate New York.  While most Six Nations are adamantly opposed to this reality, this statement is easily verifiable.  The Six Nations came to what is today Ontario as Loyalist refugees in 1785.  There had been Loyalist settlements in the Niagara Penninsula from about 1779 by elderly members of Butler's Rangers.  By 1783 Loyalist refugees of all racial - ethnic - cultural backgrounds were already flooding into Ontario from the present day eastern border to the western border in the Windsor area.  This is two years before the Six Nations moved from the American side of the Niagara River to occupy the Grand River Tract.  The land that was to become the Haldimand or Grand River Tract was purchased by Governor Sir Frederick Haldimand from the Mississauga (an Anishinaabe / Algonquin people) who were the aboriginal owners of the land.  The Grand River Tract is the aboriginal territory of the Mississauga, who sold all right, title and deed to the Crown in 1784.  An excellent overview of this subject can be found in Garry Horsnell's article and viewed here.

So in effect, the above decision has no impact on the Six Nations of Ontario.

The above are the facts in the matter.  I will now provide what information is available to date on:

How the Six Nations Interpret the Tsilhqot'in Decision:  Facts and fantasy often get confused in Six Nations politics.  While the Haudenosaunee Development Institute is the enforcement arm of the HCCC, the newspaper "Turtle Island News" is its voice, with the Editorials and reporting consistently in favour of the HCCC over the Six Nations Elected Council (SNEC).  Since the only other Reserve newspaper is managed (at the operational and editorial level) by non-Native Communist Party of Canada activists, it is clear that the Elected Council can expect to have little support from the local media.

In an article entitled, Haudenosaunee Confederacy says Ontario can end any violence ("Turtle Island News" (TIN), July 9, 2014, p.2) in a press release of 8 July 2014 directed to the Province of Ontario, the HCCC said that they want, to maintain a "path of peace and friendship" and return to the agreed upon resolution process i.e. the Communications Protocol discussions".  Furthermore they are "deeply concerned that there will be grave consequences for all people involved should the Crown's inaction continue.  We will make ourselves available to meet with your Ministers through the Communications Protocol negotiation process at which time we will meaningfully consider how best to continue with our reconciliation efforts".   This statement was issued after they had turned down an opportunity to meet with the various Ministers.  However since a "representative of the Indian Act system" (Elected Council) would be present, they declined to attend.  Apparently it is "our way or our way".  Who would negotiate under direct threat with an element that has been involved in criminal activities for which they (HDI members) were assigned hefty fines by the Ontario Superior Court in Brantford.  Their extortion methods had been put to the test and failed.  Here is where we come to the part which brings the Tsilhqot'in decision into play.

The HCCC press release, according to the article in TIN, said the following.  The release also reminded Ontario of a Supreme Court decision in the Tsilhqot'in title and rights case which determined that that Band Councils do not have the ability in Canadian law to represent the collective rights and interests of the original peoples of this land.

"We find ourselves in agreement with the Supreme Court of Canada's endorsement of the Honourable Justice Vickers following statement:

"While band level organization may have meaning to a Canadian federal bureaucracy, it is without any meaning in the resolution of Aboriginal title and rights for Tsilhqot'in people".

So what does this decision have to do with Six Nations Band members?  Nothing.  The Judge was speaking ONLY of situation concerning the Tsilhqot'in people, and to extrapolate any further is unwarranted cherry picking.  The only way to find out if this would be deemed true is to test it in an Ontario Court.  However due to the above two conditions (treaties have been made with the First Nations peoples of Ontario; and the Mississauga not the Six Nations are aboriginal to the lands upon which the latter are making a claim) it would be a futile endeavour.

Perhaps the HCCC and their legal advisors think that they can pull the wool over everyone's eyes here, but Ontario would only cave for other reasons, not the ruling in British Columbia.

Clearly it is the B.C. ruling that has given new vigour to the assertions of the HCCC, but energized or not - they are following a false path that will lead to a dead end.  It is understandable that most people do not have the skills needed to challenge their claim in the Court of public opinion - although I really doubt that any but their hard core supporters would see the parallel they are trying to draw.

Interpretation:  The HCCC has refused to recognize the legal right of the Elected Council (SNEC) since 1924.  This is nothing but a continuation of this factional squabble, with an attempt at using the Tsilhqot'in decision to jockey for more power and diminish the role of SNEC.  In my opinion this latest assertion is a desperate ploy on the part of the HCCC legal staff, and will backfire in both the legal Courts and the court of public opinion.  It does not seem that the HCCC is getting the best of advice, and may as a consequence make a serious misstep.  The Ontario Government requested their presence at a meeting to discuss the problem and they refused (yet are calling for meetings with Ontario, under their terms).  The Federal Government has already repeatedly deemed the land claim to be invalid and thus the Six Nations who occupy the Douglas Creek Estates are there illegally, and occupying Ontario Government owned land while refusing entry to any citizen of Ontario except those who they have deemed to be worthy.  The Ontario Government has title to the DCE, and Haldimand County has title to the roads (such as the blockaded Surrey Street) leading into DCE.  The HCCC has no legal rights whatsoever, and their  hugely expensive illegal acts plus intimidation and threats of violence cannot be tolerated by the taxpayers of Canada (who are footing the bill) and citizens of Caledonia (who are on the front lines) any longer.  What they are doing is illegal and immoral.

DeYo.
Posted by Administration at 17:16